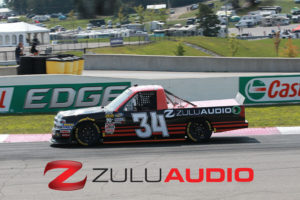 This past weekend Lt. Jesse Iwuji placed 25th in his first career race at NASCAR’s Camping World trucks series. When asked about the preparation for his race, Iwuji responded “It’s pretty hectic, a lot of people don’t realize that you don’t just show up, jump in a racecar and race. There’s a lot of stuff that goes into it and I am working all day trying to make sure everything goes and works right.” 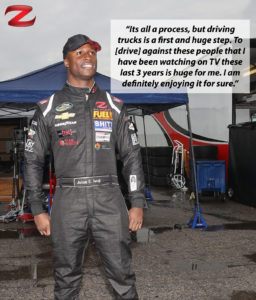 On Twitter, Lt. Iwuji said his race was a “clean p25 run.” By running a clean race, he meant “don’t get in any wrecks, don’t be spinning off the track, or hitting anything or tearing up the car.” He told us that that this was his goal going into Sunday and said “we ran clean and finished top 25, especially with our limited resources. We were running against some pretty big money teams. You know, the guys who win and get the top spots, it costs $150k – $180k each race.”

Even with the small, albeit strong, support Lt. Iwuji has, he advanced six places ahead of his starting position during the Chevrolet Silverado and competed with a total of 32 trucks in the race. He finished two laps down to the winner of the race, Justin Haley.

Lt. Iwuji aims to compete in more races and eventually the Cup Series. “It’s all a process, but driving trucks is a first and huge step,” Iwuji shared “To [drive] against these people that I have been watching on TV these last 3 years is huge for me. I am definitely enjoying it for sure.”

Zulu Audio proudly sponsors Lt. Iwuji and we are excited to stand by him as his career advances.